Most of the players in Series Two never played above the minor leagues, but 27 enjoyed at least a cup of coffee in the majors, including three quite familiar to vintage collectors. Lafayette Napoleon (Lave) Cross (at right), player-manager for the Charlotte team from 1909-1911, was a 43-year-old veteran on his way down, having been released from his seventh major league squad in 1907 after amassing over 2600 hits in 21 campaigns. Lave had the misfortune of managing the Cleveland Spiders during part of the nightmarish 1899 season in which they went 20-134, although his managerial winning percentage of .211 (8-30) was much better than anyone else achieved with that hapless group.

Spartanburg’s outfielder Clarence (Tillie) Walker, born and raised deep in the Smoky Mountains of east Tennessee, was a promising 22-year-old flycatcher when he appeared on a T209 card. In June, 1911 he was tearing up the Carolina Association with a .390 average when he was sold directly from Spartanburg to the Washington Americans for $700, initiating a fine 13-year career which featured a World Series ring with Boston in 1916 and a home run crown (11) with the Athletics in 1918. Walker hit 37 homers in his last full year (1922), leading one to wonder how many he might have hit if he had played his whole career with a lively ball. 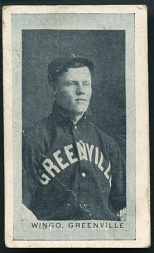 Catcher Ivey Wingo, born in northern Georgia in 1890, hit .275 in 107 games for Greenville in 1910 before going to the St. Louis Nationals the following season. Ivey, whose younger brother Al also appeared in the majors, played with St. Louis and Cincinnati for almost 20 years, departing the show in 1929 after catching 1327 games. Like Walker, he achieved the status of World Champion one time, with the 1919 Reds.

Ironically, the most famous major league player appearing in the Eastern Carolina League in 1910 was one Erwin-Nadal missed the opportunity to include: Jim Thorpe. He began the 1910 season with the Rocky Mount Railroaders where he compiled a 10-10 pitching record, and finished with the Fayetteville Highlanders who used him at first base.